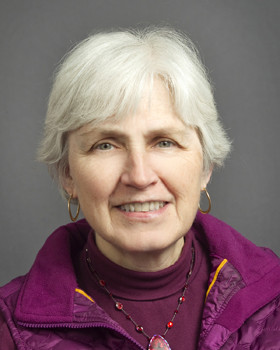 Cooperative Extension Specialist Peggy Lemaux’s laboratory performs both basic and applied research focused primarily on cereal crops, like sorghum, wheat, rice and barley. The objectives of these studies are to better understand crop plants and to use that knowledge to improve their performance and quality. More recently efforts with colleagues have focused on bioenergy – especially in the versatile feedstock, sorghum. In addition to research, Lemaux develops educational resources on food and agriculture that are disseminated to professionals, the media and consumers. These resources include an award-winning website (http://ucbiotech.org) that has afterschool curricula for middle school students, educational displays and games, videos, PowerPoint presentations and fact sheets. In 2015 the Global Food Initiative, through the UC Office of the President, provided resources for the CLEAR (Communication, Literacy and Education for Agricultural Research) program. This effort focuses on mentoring undergrads, grads and postdocs to engage in science-based communication with the media, legislators and the general public. 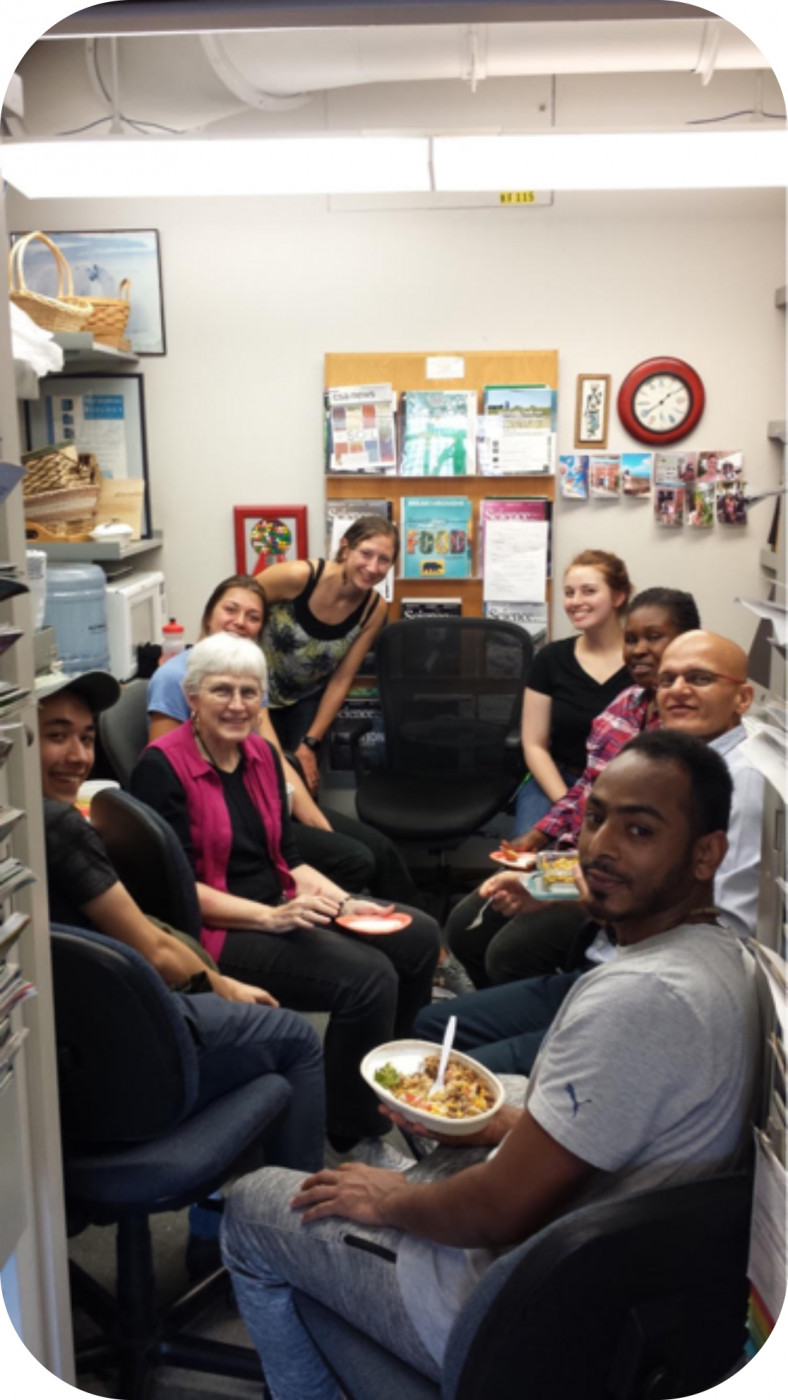 The Lemaux laboratory focuses on development and use of genetic and genomic technologies for monocotyledonous species, like sorghum (Sorghum bicolor), rice (Oryza sativa), wheat  (Triticum aestivum), and barley (Hordeum vulgare). Long-term objectives are to use these technologies to study gene function, explore basic biological questions and to improve crops.

Methods for stably transforming cereal crops are more routine today than decades ago, but challenges still exist. Nearly all methods utilize in vitro- tissue culture materials, which leads directly or indirectly to limitations in varieties that can be transformed, to somaclonal variation and to transgene expression instability.

Most cereal transformation efforts involve culturing immature embryos. This approach has been successful for model genotypes but, until recently, has been challenging for other varieties. For this reason, our laboratory developed other culturing methods, like cultured adventitious meristems and highly regenerable, green tissue, a developmental stage between embryogenic and organogenic tissue. These methods provide successful for previously recalcitrant varieties of wheat, barley, corn, rice, oat, sorghum and forage and turf grasses  (e.g., Cho et al., 1998, 1999a; Ha et al., 2001; Cho et al., 2000a; Cho et al., 2000b; Zhang et al., 1999, 2002b; Gurel et al., 2009). 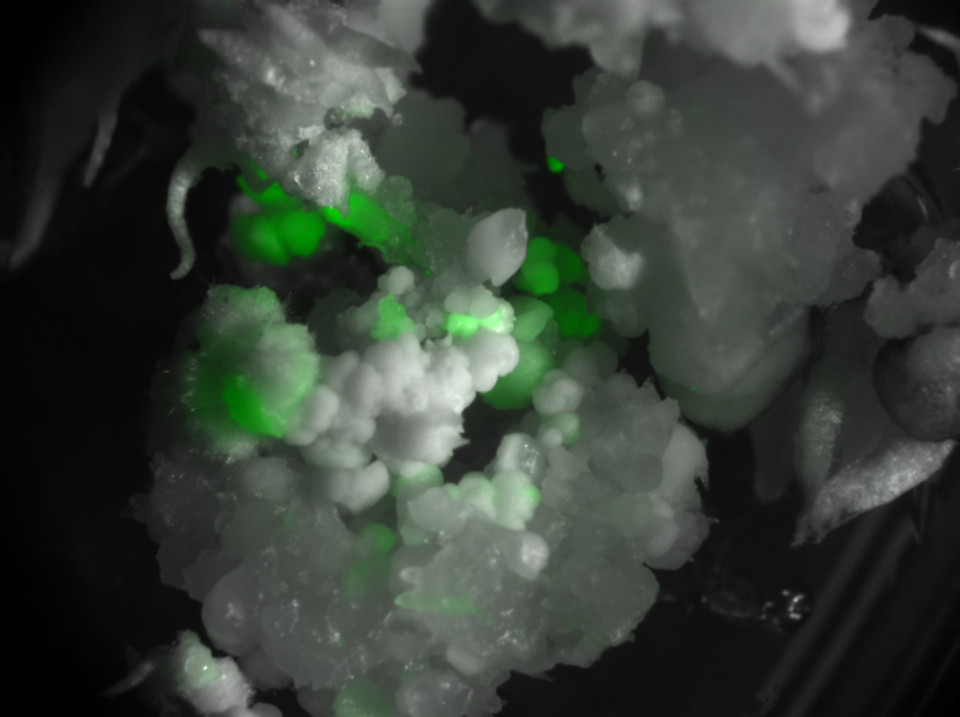 In 2016, a game-changing technology was published involving introduction into maize of developmental genes, babyboom and wuschel, that reset cells to an early developmental stage. This approach led to transformation success with more cultivars and the use of explants, like leaf bases (Lowe et al. 2016). The Lemaux lab has customized this approach for sorghum and Setaria viridis, a model C4 grass. This method has been successful  with all genotypes of sorghum attempted, including the two varieties being used in the EPICON project. Target tissue used is immature embryos and leaf bases. Current work is aimed at developing co-transformation methods that can be used to confirm and extend gene function for the rich gene sets identified through the EPICON drought project. 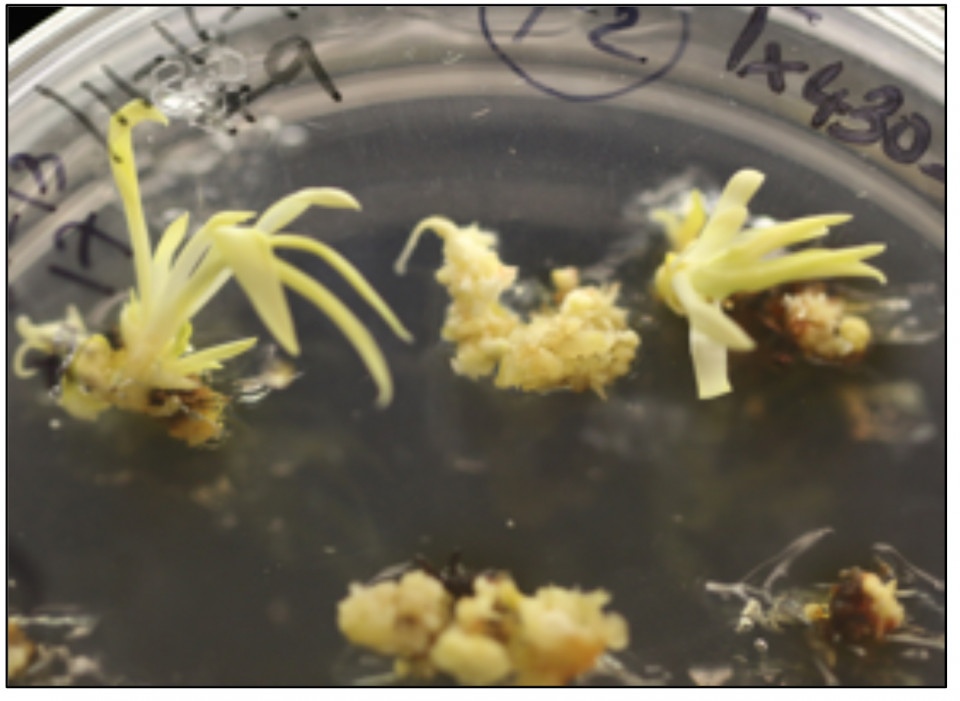 Another approach to study gene function was an NSF-funded project in barley. The maize transposable element, Ds, and its transposase gene(with P. Bregitzer, USDA-ARS), were introduced into the same cell, Ds was activated and transposed preferentially to genic regions (Koprek et al., 2001; Brown et al., 2014). Inverse PCR was used to sequence flanking DNA, identify genes into which Ds inserted and map its location (Cooper et al., 2004; Singh et al., 2006). Efforts have continued to identify tagged genes in barley (Brown et al., 2014). But, mapping insertion locations was tedious and recently efforts have reignited to use high throughput methods to map Ds transpositions and develop a mutant resource with tags in all genes in barley.

Considerable effort went into the creation of transgenic cereals that over- and under-expressed elements of the NADPH thioredoxin (Trx) system (with B. Buchanan, UCB). To achieve maximal grain Trx overexpression, we used seed-specific promoters and vacuolar targeting to direct transgene expression to protein bodies of the endosperm  (Cho et al., 1999b; Cho, M.-J., Lemaux P.G., Buchanan B.B. Production of proteins in plant seeds. Official Gazette of the United States Patent and Trademark Office Patents. Patent Number: US 07157629, January 2, 2007. The Regents of the University of California).  This technology, termed ExpressTec, is currently being used by a Colorado-based company to produce clinical therapeutics. 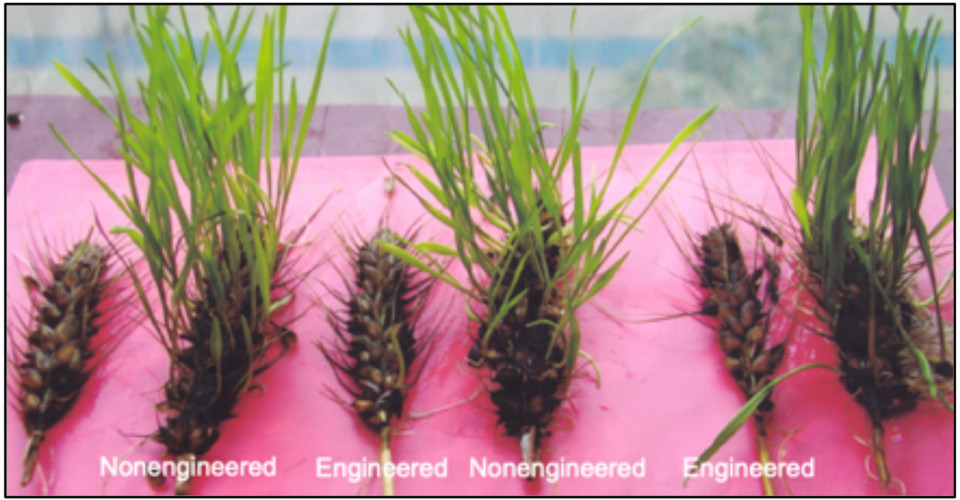 Building on this with Chinese collaborators, using antisense to reduce trx h9 levels, we showed that this prevented preharvest sprouting (Li et al, 2009). Earlier evidence in barley showed that changes in the endosperm caused effects in the embryo and aleurone. Work in Arabidopsis demonstrated that trxh9, unlike other thioredoxins, is located in cell membranes, possibly func  tioning in cell-to-cell communication of redox state between endosperm, embryo and aleurone (Meng et al. 2010). 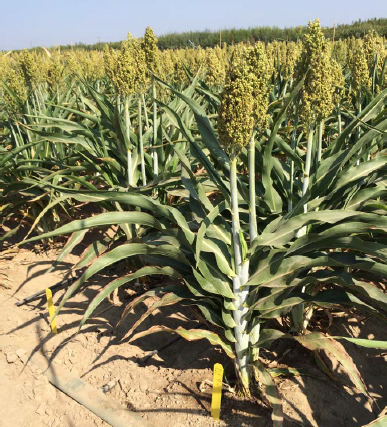 In 2015 the laboratory became involved in the EPICON project, Epigenetic Control of Drought Response in Sorghum, funded by a 5-year DOE BER grant. This collaborative project, between UC Berkeley, UCANR, the Joint Genome Institute and the Pacific Northwest National Laboratory, is using transcriptomics, metabolomics, proteomics and epigenetics to develop an in-depth understanding of drought tolerance in Sorghum bicolor in the field. In addition to assessing the impact on the plant during drought, this project has also focused on the involvement of the microbial community during drought. The first published study (with D. Coleman-Derr) was a high-resolution exploration of the longitudinal development of plant microbiomes during control and drought conditions (Yu et al. 2018). A drought-induced enrichment of monoderms, like Actinobacteria, occurs and metatranscriptomics showed that drought results in increases in transcription of specific metabolite transporters. This correlated with increased production of the same metabolites. in vivo colonization experiments demonstrated that inoculation with drought-enriched Actinomycetes leads to increased plant fitness, following drought stress. 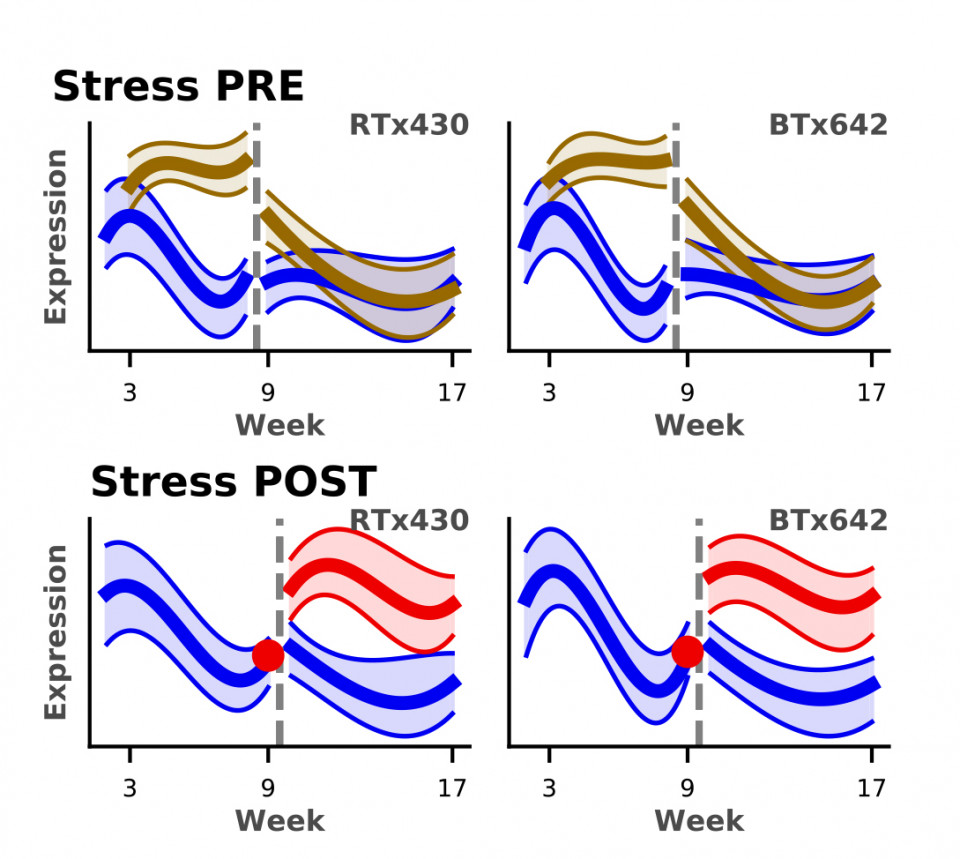 Companion studies (with J. Taylor) investigated the impact of drought on arbuscular mycorrhizal fungi, those microbes that provide plants with needed nutrients and mineral.  These studies focused on describing fungal succession in nature and that drought causes changes in the dynamics of what fungi colonize the leaves and roots (Gao et al., 2019, 2020).  Transcriptomics studies of leaf and root samples over the entire developmental phase and drought period revealed a large impact on transcription with >40% of gene expression being influenced by pre- and post-flowering drought (Varoquaux et al. 2019).  These changes affect genes involved in critical functions, like biotic and abiotic stress responses and photosynthesis.  Specifically, we identified genotypic differences in core photosynthesis and reactive oxygen-species-scavenging pathways, possibly related to drought tolerance. Also noted was a large-scale depletion in the expression of genes critical to arbuscular mycorrhizal (AM) symbiosis. Current work is focused on validating function of a myriad of genes identified as targets critical to drought tolerance.

Additional information on the EPICON project is presented below. 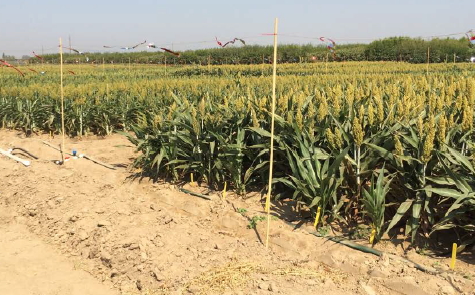 This five-year project, “Epigenetic Control of Drought Response in Sorghum" (EPICON), came following an historic drought in California. During four years of field-testing, samples were taken weekly throughout the growing season from germination to harvest under three watering conditions – control, pre-flowering and post-flowering drought. These samples were used to investigate responses of sorghum and its microbiome to drought, including gene expression, metabolomic, proteomic, metagenomic and metatranscriptomic changes.

"While originally intended to look at epigenetic changes, which can allow plants to respond to changing environments quickly, the richness of the transcriptomic and microbiome data has focused our attention on those data sets, while holding the bisulfite-seq data for the time.

It is well known that associations of specific bacteria and fungi with plants have positive effects on plant fitness. Through this detailed temporal and spatial assessment of the microbial communities in leaves, roots, rhizosphere and soil, we have been able to develop a more informed picture of the role of microbes in the drought responses of plants, and the influence of the communication channels between these groups of organisms.

Long-term efforts of EPICON researchers are to develop better predictions about how sorghum is affected by future climate scenarios, and using that information through breeding, engineering or editing to improve crop growth and production under water-limiting conditions. 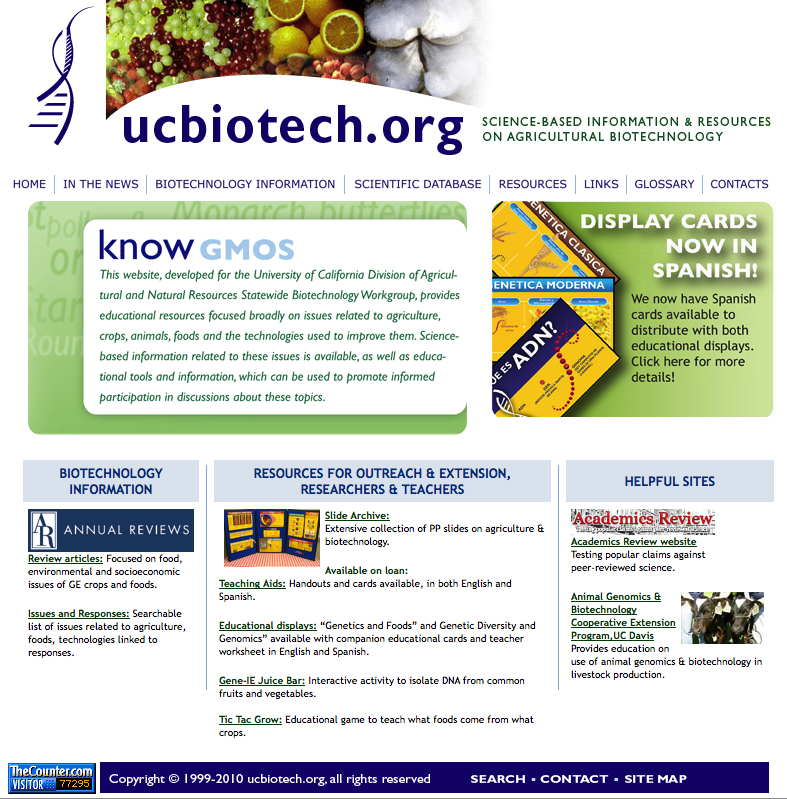 As a Cooperative Extension Specialist, I have statewide responsibility for outreach and educational programming related to agriculture and food. These efforts are designed to increase public understanding of agricultural practices, food production and the impact of new technologies, including biotechnology and genome editing, on food and agriculture. Educational programming and resources that are developed include development of an award winning, website, http://ucbiotech.org, which provides science-based information and resources. Two articles related to these efforts were published in Annual Review of Plant Biology, “Genetically Engineered Crops and Foods: A Scientist's Analysis of the Issues. Part I and II (Lemaux PG. 2008; 2009). Recently a new article has been published in ARPB, "Genetic Engineering and Editing of Plants: An Analysis of New and Persisting Questions" (Mackelprang and Lemaux 2020). With my long-time assistant, B. Alonso, we created games, displays, videos and middle-school afterschool curricula, DNA for Dinner, Backyard Mystery and Learning Plant Biology: It’s All in the Touch. A recent project, CLEAR (Communication, Literacy, Education for Agricultural Research) was initiated with funds from UCOP’s Global Food Initiative. CLEAR aims to enable undergrads, grads and postdocs with skills in communicating about science with the media, legislators and the public. CLEAR fellows write pieces for the popular press, organize roundtables, participate in outreach events and develop videos.