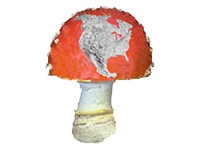 Professor Tom Bruns is leading a Herculean effort to thoroughly identify all fungi in North America, and catalog it. It's called a mycoflora, and will be a comprehensive guide to North American fungal species. It will be multi-authored, and thoroughly edited. Below is a thorough explanation of the project from the newly developed mycoflora website.

In addition, video from the first workshop held in July to begin work on this project is now available on youtube: http://www.youtube.com/playlist?list=PLOyuQaVrp4qrweAIKZRhJjlPFj2gbYJgY&feature=view_all.

So what is a mycoflora (or mycobiota, mycota, or funga if you prefer), and how does it differ from a field guide? Plant floras are really the models for these questions. If we take the examples of floras like the Jepson Manual, the Flora of the Pacific Northwest, or Gray's Manual of Botany, we see that floras are much more comprehensive than field guides in that they strive to include all known species in a region. Each species is keyed out and described in more detail than is usually found in a field guide. Floras include distribution data that are based on vouchered specimens, provide information on which species are native to a region versus which are alien, include basic information on the habitats where species are commonly found, and do all of this in a more comprehensive fashion than field guides.

The comprehensive nature of a mycoflora would provide an unparalleled tool for identification, and it would be a repository of distribution data for all the species. A mycoflora would essentially be a collection of monographs; it would have to be multi-authored, so that experts on particular groups wrote the appropriate sections, but it would also have to be thoroughly edited so formats were uniform and keys worked well. Beyond identification, one of the main values of a mycoflora would be the access to the distribution data. Currently we have only a vague notion about fungal species distributions. Assembling real distribution data on fungal species will likely reveal shared patterns of distributions, much like we see in plants. For example there are probably distinct mycofloras in many regions of the continent (e.g., Pacific Northwest, Southeast, Midwest, Southwest, Boreal, etc.). The regional mycofloras comprise both different assemblages of widespread species and endemic elements. Some, perhaps most, of the widespread species may involve cryptic species that appear to be the same but are genetically different.

Why Don't we have a North American Mycoflora?

If a mycoflora is such a valuable tool, why hasn't a modern one been written already (we're ignoring lichens where there is a good floristic treatment, Brodo & Sharnoff, 2001). Unfortunately the answer to this is rather obvious: the basic information is not available. Most of the monographs have not been done. Another obvious problem for assembling mycofloristic data is that there are very few mycologists versus a large number of fungi. Estimates of fungal numbers were originally based on a ratio of six species of fungus for every one vascular plant in Europe (Hawksworth, 1990). This ratio now looks conservative (Hawksworth, 2001), particularly when tropic regions are included (Frolich & Hyde, 1999). Thus from an organism perspective alone the job of assembling a mycoflora is very conservatively six times more difficult than the job of assembling a flora. But the problem of being outnumbered by the organisms is further exacerbated by the small number of mycologists. To get a rough estimate of the problem we can use the 1:5 ratio of mycologist to botanists based on MSA to BSA membership numbers. Combining these two numbers means that we have a ratio of organism to scientists that is about 30 times worse than that of plants and botanists! The problem does get better if we limit our sights to only macrofungi, essentially the mushrooms, polypores, truffles, corticoid fungi, and Ascomycota with large sporocarps. We think limiting the problem in this way is the only practical way to proceed in the short-term. As we will argue below, we are going to need the public for this effort, and we think that that requirement will make assembling distribution data on microfungi impractical.

Producing the data for a mycoflora is difficult since fungal fruiting is often short in duration or unpredictable, and many species appear to be rare. But we do have at least three factors that have developed in recent years that will help us:

With these tools, lots of help from people like you, and some coordination, we think we could start to make some real progress on a continental mycoflora at least for the macrofungi. Ultimately, we need some serious funding for this, a point we will return to, but even with minimal funds we can get started.

There are at least three elements that we will need to start assembling a mycoflora. First, professional mycologists and informed public absolutely have to work together on this; there are simply not enough professional mycologists to accomplish this task (see above). Other countries, such as the Netherlands, Switzerland, and Germany, (Anon., 2000; Anon., 2006; Kriegsteiner, 1991; Nauta & Vellinga, 1995) have already embraced this approach. Here with the North American Mycological Association and all of its associated local organizations that are already engaged in collecting and identifying, it seems like all we need is some added organization. In the lingo of the National Science Foundation you are "citizen scientists", and many of you are highly competent taxonomists. Are you ready to work together on this?

Second, this must be a specimen-based effort and specimens must be coupled to at least basic metadata (location, date, habitat, specimen notes). Foray lists or Mushroom Observer posts, even when supplemented with good photos, are not sufficient evidence for the presence of most species. Dr. Barbara Ertter, who worked on the Jepson Manual (a flora for California), summarized this best when she said: "without a specimen, it's a rumor". Specimens provide the necessary ground truth that can be reexamined as species concepts change; without them we stand on weak ground. However, the requirement for specimens adds two additional complexities to the problem: curation and herbarium space. These are respectively time-consuming and in increasingly short supply. NAMA has foray lists going back 50 years to 1961 and has kept vouchers for each annual foray since 1997 (Leacock, et al, undated). So this is a great start. But funding cuts at the Field Museum of Natural History in Chicago have meant the departure of both of the mycologists who had overseen the curation work so we are losing even that one tiny three-day annual window at one rotating place in North America. Meanwhile the Pacific Northwest Key Council is trying to improve our knowledge of the fungi of the Pacific Northwest by documenting and curating collections from their annual spring and fall forays. However, each year they have to find a herbarium willing to take the collections for that year and volunteers willing to document and dry the material and see that it is deposited in a herbarium.

Third, nucleotide sequencing is a must. In fact for fungi we could modify Dr. Ertter's motto to "without a specimen and a sequence, it's a rumor". Most of our fungal diversity probably resides in difficult species complexes, and it is at this level where regional differences in the mycoflora are likely to be most numerous. The fastest and most objective way to sort out these complexes is with sequence analyses. Deposited sequences are also an easy way for those doing monographic work to screen for collections that might be of special interest. Ideally sequencing would be a multilocus process, but even if we started with a single locus (like ITS) it will greatly aid in the process of sorting out species. Fortunately, there are some really easy DNA sampling, preservation and extraction methods now available (Dentinger, et al, 2010) that are very well suited to this goal, and the price for sequencing continues to drop.

What can we do with little or no funding? We can certainly start to organize, by improving connections between professional mycologists and citizen scientists. We can do this by using existing web technologies such as the Mushroom Observer and Google Docs to help report and coordinate efforts within and between groups, and if spare funds are available, we can start to sequence through the collections. Bruns' involvement with this approach started when David Rust, a co-founder of the Bay Area Mycological Society (BAMS), approached him and asked what local mushroom clubs could do to contribute to science. His question came on the heels of the Asheville, NC joint NAMA-MSA meeting, where the "mycoblitz" of the Great Smoky Mountains National Park had occurred. So using the mycoblitz as our model we started a survey of the macrofungi of Pt Reyes National Seashore. This has been an ongoing project for several years and has now expanded to Yosemite National Park. It has been a very rewarding experience that provided a great excuse to learn many fungi, and it has helped two national parks to start cataloguing their fungi. In Pt. Reyes we have now increased the known number of fungi in the park by over four-fold, and in Yosemite we doubled the number of known fungi in a single year; this says a lot about how little the parks knew, but it also says a lot about what can be done with a shoe-string budget and some hardworking volunteers. This work was primarily driven by members of the public, who did most of the collecting and identifying, helped produce web content1, and helped curate the specimens (Fig. 1). We have started to sequence these collections with help from Mike Davis (UC Davis) and with a series of undergraduate projects at Berkeley. The results have revealed many novel fungi even among common species that we thought we knew.

Many other similar surveys are going on across the continent. Jean Bérubé (Research Scientist, Canadian Forest Service) has been involved with a project to survey the mycoflora of Québec for the last several years. This project is being done in collaboration with Cercle des Mycologues Amateurs de Québec and Cercle des Mycologues de Montréal and Mycoquébec, and involves weekly forays, voucher collections and sequencing. In two years they have managed to collect 1210 specimens representing 781 species. In an email response to our questions about this project Bérubé underlined the role of the public when he wrote, "without the collaboration of mycological clubs and citizen scientists, this work would be impossible. They assume more than 90% of the task and their expertise is irreplaceable." The Pacific Northwest Key Council recently (June 2011) accepted Jim Johnson’s (Central Washington University) proposal to help study the mushrooms of the Cle Elum Ranger District of the Snoqualmie National Forest by assisting with collection and description of the fungi while he and his students do the DNA work using funding from the U.S. Forest Service.
If we had funding

What could we do if the mycological community had funds to produce a North American mycoflora for macrofungi? Here is our short list: 1) digitize all major fungal herbaria in a way that allows a single search to retrieve records for all available collections; 2) pay for travel for people to collect in different areas of the continent, and to participate in targeted forays; 3) pay for expanding and centralizing DNA extraction and sequencing, and give trained members of the public access to it; 4) pay for training workshops on collecting, describing, and identifying mushrooms in taxonomically difficult groups; 5) pay for curation of newly collected specimens; 6) develop a wiki-style website for the North American Mycoflora that would coordinate the data, display distributions, and provide identification tools for all taxa; 7) organize and coordinate the writing, by hiring a staff and by supporting experts to write the individual sections; and 8) begin expanding to the microfungi. To do the job right would require at least 18 million dollars over 15 years2, with the money being distributed across six regional centers.