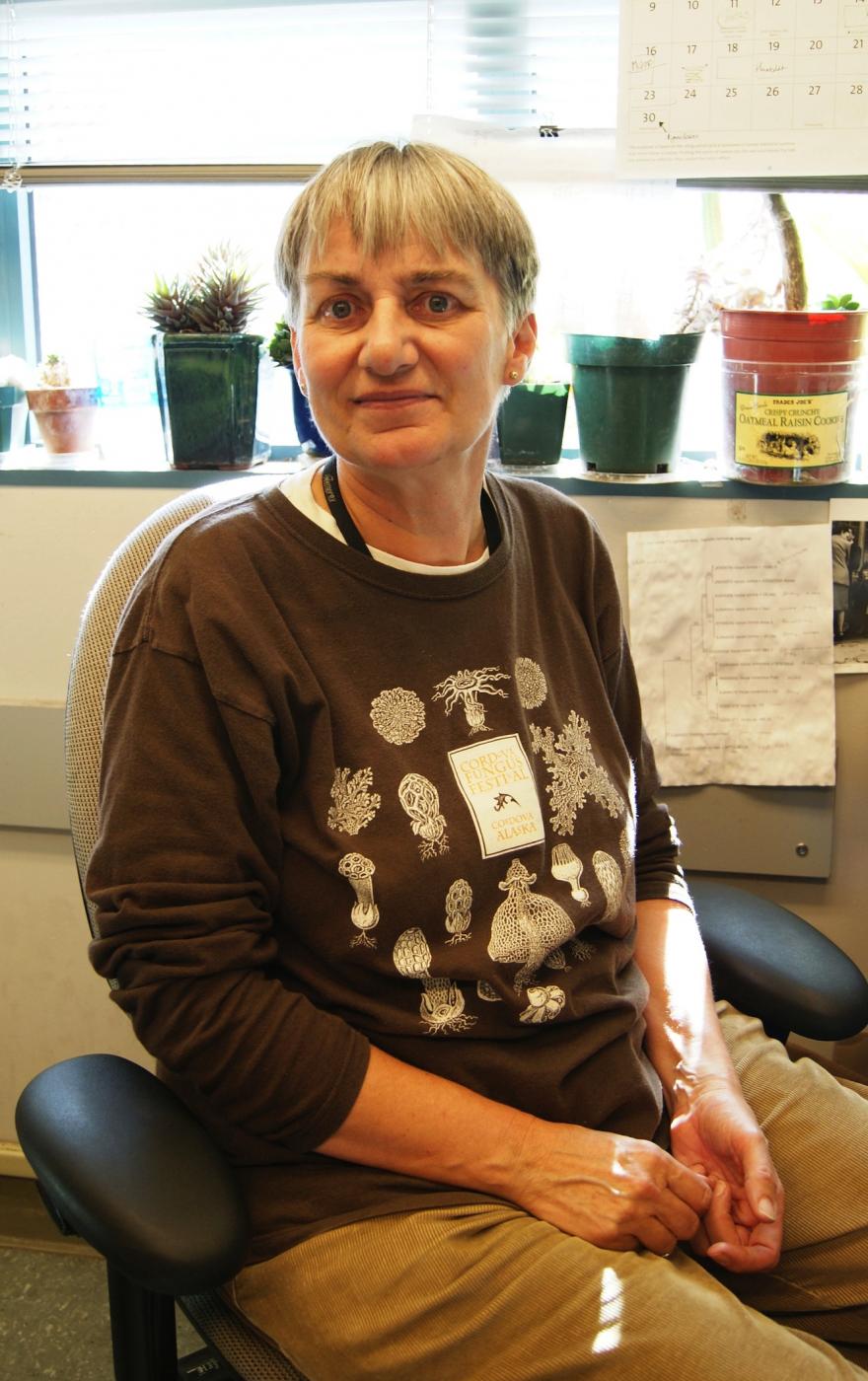 By Karyn Houston
Plant & Microbial Biology
Two researchers who recently named the first new species of mushroom from the UC Berkeley campus in more than 30 years are emphasizing the need for continued green and open space on campus, as well as a full-fledged catalog of all North American mushroom species.
Else Vellinga and Nhu Nguyen were ecstatic last year when they found and described Helvella dryophila, a beautiful black “elfin saddle” associated with oaks on Observatory Hill, an open space area next to the C.V. Starr East Asian Library. The mushroom is edible, but doesn’t taste very good and may be poisonous if not cooked properly. They published a paper about their finding in Mycologia. 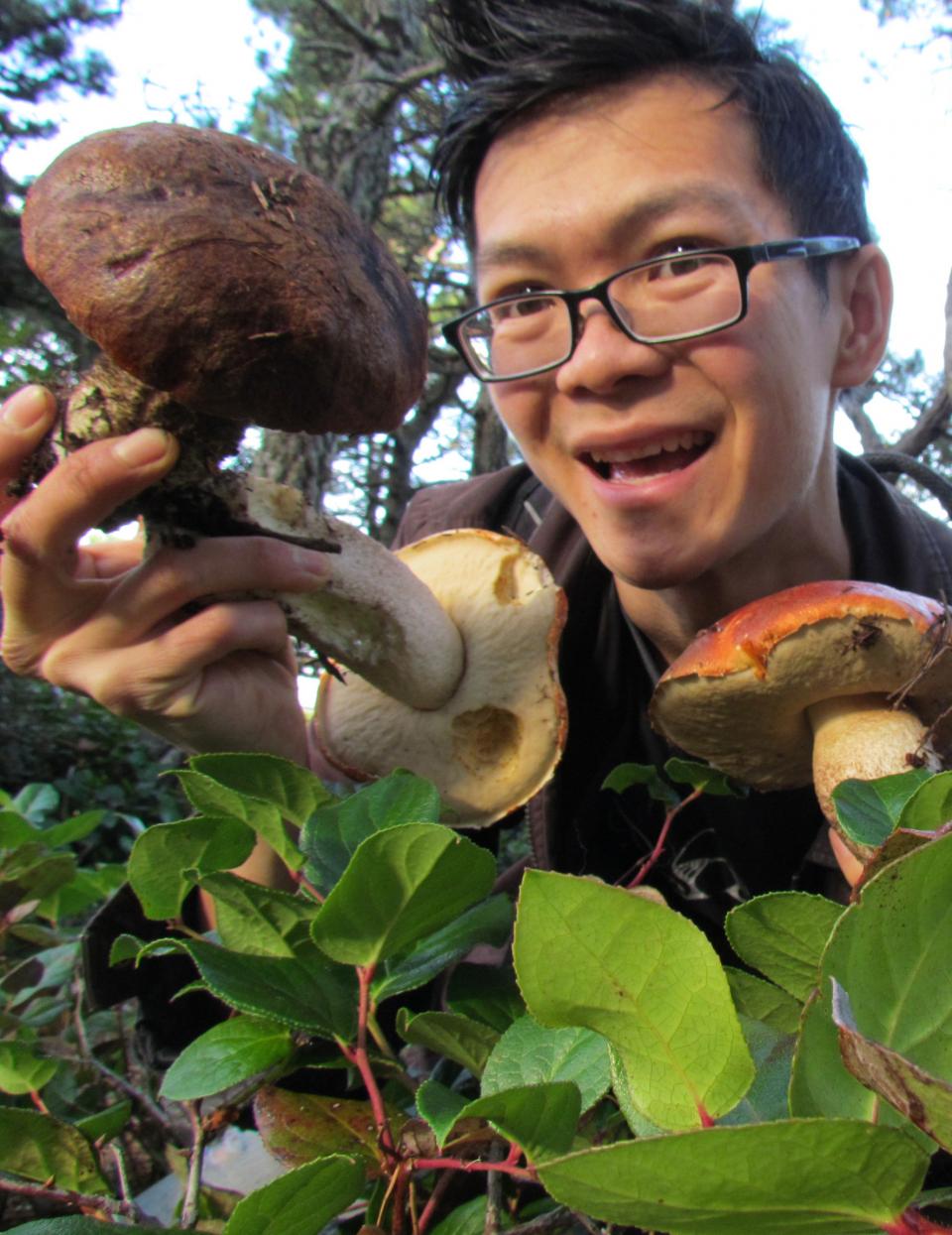 “So far only 11 other species have been described from campus,” Nguyen said. “The last time this happened was in 1985.”
The find illustrates the importance of maintaining and retaining open space and healthy vegetation on Cal’s 1,232-acre urban campus, the researchers said. The discovery also demonstrates the need for a definitive catalog of mushrooms in North America, a longtime goal of Professor Tom Bruns of the Department of Plant & Microbial Biology at UC Berkeley.
Vellinga currently works as a Research Associate in the UC herbarium and in the Bruns Lab, and Nguyen was a graduate student in the Bruns Lab, before graduating and going to Professor Peter Kennedy’s Lab at the University of Minnesota as a postdoctoral scholar.

Bruns is one of the world’s foremost experts on fungal ecology.  The research done in his lab regarding fungi that are symbiotic on tree roots is at the cutting-edge. For years, Bruns has been trying to get funding in order to put together a catalog of North America mushroom species; this project is tangential to his main work in fungal ecology, and is a necessary step for the field of fungal biology.

As of 2014, a total of 12 mushroom species have been described from campus. The other 11 species were described as new between 1907 and 1985.
The UC Berkeley campus serves as the “type locality” for these species, meaning that the type collection (representative specimen) for these species was made on campus, and that any other mushrooms found of the same species would be compared to this collection. 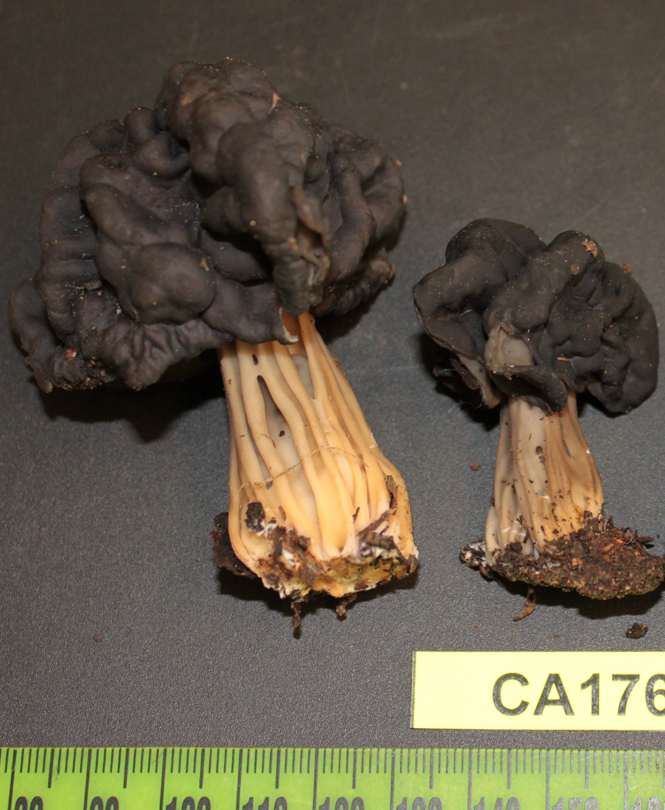 "Type localities have elevated scientific value because it is where the representative specimen was found,” said Nguyen.
"Many mushroom species in California, and across North America, are mistakenly known by European names, but with the advent of DNA sequencing and more precise identification, it was discovered that our native mushrooms are entirely different," Nguyen said.
“Once we figured out that the California elfin saddles were completely different from the European elfin saddles, we focused on the group and described two new species from California,” Nguyen said.
The other species described from the same paper, Helvella vespertina, is a larger mushroom. Its type locality is Salt Point State Park, a productive and diverse mushroom habitat in Sonoma County. Both species can be found in Southern California to the Oregon border, and interestingly on our very campus.
“What was happening is that these mushrooms were parading around under another species’ name,” Vellinga said. “We can still find mushroom species that are new to science, right here on campus.” What has enabled the team to identify the mushroom correctly is DNA sequence analysis, the current definitive measure for all species identification.
Bruns and Vellinga have recorded about 150 species of mushroom from the UC Berkeley campus (including the 12 species that have their type locality on campus). On the list are edibles such as chanterelles and porcini, and deadly species such as the death cap (Amanita phalloides).  Researchers issue a strong note of caution when searching for mushrooms. In addition to the obvious – make sure they’re not poisonous – also watch out for pesticide contamination when hunting for mushrooms in the cities and on lawns.

Researchers agree that along with identifying new species of mushrooms and continuing to hunt for them, a definitive catalog of all mushrooms in North America is crucial.
“We’re desperately trying to catalog life on earth, and fungi are a huge part of that. Biological diversity is important to the future of the planet, especially in the face of changes in climate, invasive species and other threats. The richness that we have on the planet is important to identify and maintain, and knowing what exists now and has existed in the past gives scientists information to stabilize ecosystems," Nguyen said.
“Within the entire continent of North America there is not a single regional, state or local catalogue of the macrofungal species that presents a credible account of the species present and their distributions,” Bruns mentioned.
It’s not just a problem for fungal biologists or for North America, Bruns said.
“The problem is most acute for plant scientists who need to identify the mycorrhizal (symbiotic relationship) or pathogenic (disease-causing) fungal associates of their plants, and for fungal ecologists who need a global view of diversity,” Bruns said.
Three important ingredients are now available that make mushroom identification easier, Bruns said:
With these three ingredients, researchers are ready to produce the said mycoflora. The first step towards this effort is the recently funded Advanced Digitalization of Biological Collections project that is digitizing the data for 1.3 million collection records of macrofungi housed in 35 institutions in the US including UC Berkeley.
The goal is to bring that “dark data” that resides in separate locations into one centralized database. However, the project does not fund the steps necessary to produce a mycoflora and Bruns has been working with other mycologists in North America to push for funding.
Funding is still needed because many species remain undescribed. Many described species need to have DNA sequences determined, an organized way to have the information accessible, and an efficient method to provide identification tool. Helvella dryophila is a good example to witness the importance of these described problems.
The researchers agree that if we can find a new species right in our own academic backyard there are many more that remain to be discovered.  New collections will be needed for this reason and are also needed to provide better descriptions to obtain DNA sequences.  The older specimens that are the basis of the digitalization project often lack good descriptions and photographs, and as they age it becomes more difficult to obtain DNA sequences from them.

The Role of Citizen Scientists

Citizen scientists are an important part of the mycoflora project.
“These are people who are employed in other occupations but dedicate much of their time to fungal taxonomy,” Bruns said. “The term ‘amateur’ does not do them justice, as they are often highly accomplished within the field of fungal taxonomy.” 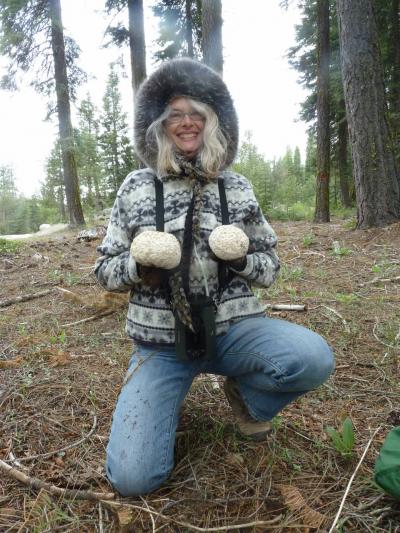 Debbie Viess, a trained biologist and “citizen scientist” said she “fell in love with fungi” and has 20 years of experience and training hunting for mushrooms.
“Mushrooms are an integral and vitally important component of all landscapes,” Viess said. “Save the landscape and you will save far more than fungi! Mushroom hunting is a joyous pursuit, kind of like an Easter egg hunt for adults, without being restricted to a particular day or religion.”
"Many species are just waiting to be described or documented in some way," Viess said.
“Our ignorance about what fungal species we have here in North America is pretty staggering, and professional mycologists who still have field skills are an endangered species. In many ways, field work and even increasing numbers of species publications are being driven by the amateur community,” Viess said. “But these are very talented amateurs.”
Cataloging mushrooms has some similarity to bird counts done by the Audubon Society in North America, moth surveys in the UK, and urban plant surveys in France. All of these efforts utilize large numbers of citizen scientists. But one difference is that in mushroom hunting, actual specimens must be found and catalogued, which are usually stored at public gardens or university centers like the Herbarium at UC Berkeley.
“Specimens are an absolute requirement for fungal surveys," Bruns said. "DNA sequencing is also critical, because fungi are often misidentified and species concepts frequently represent composites of several species. Specimens anchor these concepts and sequences to a physical entity.”
The problem may seem like an issue that would only concern specialists, but it has a much broader impact as it directly affects the way we think about the environment, biogeography, conservation, and invasive species. From wood-rotting fungi that clear the forest floors of dead wood, to the truffles in our food, mushrooms and other fungi play a critical role in the lives of plants and animals, including the health and welfare of humans.  Understanding fungal biodiversity will be critical in analyzing the effects of habitat change, nutrient cycling in ecosystems and much more.