Cooperative Extension Specialist Peggy Lemaux has been elected President of the 5,000-member American Society of Plant Biologists, a key position that brings 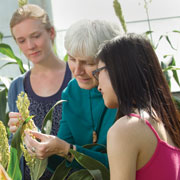 some attention to Department and the University of California. Lemaux, a leader in educational efforts in agriculture, food and farming methods, has been a member of the Society for 27 years and is the fifth UC Berkeley scientist to lead this professional group in its 87-year history as a plant biology-focused organization.

Lemaux will be on the forefront of providing input on important decisions related to plant research and funding  - issues that affect the plant biology community in the U.S. and around the world. Owing to its membership, the society has extensive international influence. Sixty percent of its members are from the US, but the rest are from more than 50 other countries worldwide. One of her top goals with the broad-based Society will be to press for increased funding for plant research – particularly important for scientists in the early stages of their careers.

"Funding is dismal," for scientific research in general, but particularly for plant science, Lemaux says. Plant research doesn't have the public support that medical research has and thus receives limited financial support. For certain federal grant programs that support plant research, success rates for grant applications can be as low as 5 percent. As a consequence, many plant scientists spend more time writing grants than doing research.

Having grown up on a farm in northwestern Ohio, Lemaux sees the importance of funding for plant research as critical for the future. While Americans spend less than 10% of their income on food (compared to 60-70% for consumers in less developed countries), severe challenges to food and bioenergy production loom due to increasing world populations and global climate change.

In the US food availability and food safety are often taken for granted, Lemaux states. This benefit builds on decades of foundational research in plant, microbial and animal biology and genetics. Additional funds are needed to keep the U.S. at the forefront of the important discoveries that will be needed to keep the U.S. competitive in agriculture. People seem to be more "tuned in" to their food today – where it comes from, what environmental costs are involved and the impact it can have on their health. With this awareness, Lemaux hopes, will come the realization that human and financial investments in plant research are needed.

Lemaux’s election as President is important because decisions regarding the finances of the Society and its publications (Plant Physiology and Plant Cell, the two leading journals in plant biology) as well as other major decisions affecting the society, are made by the leadership of the society and that is led by the president,” said Russell Jones, professor in Plant and Microbial Biology at UC Berkeley. “The appointment is really a three-year commitment, first as president-elect, then president and finally as past president,” said Jones, who served as President in 1993-94.

Lemaux is the only Cooperative Extension Specialist in the Department of Plant and Microbial Biology in the College of Natural Resources at the University of California, Berkeley. Her position has statewide responsibility for outreach and educational programming related to agriculture and foods. The outreach efforts are designed to increase public understanding of agricultural practices, food production, and the impact of new technologies on these areas. Bob Buchanan, a professor in Plant and Microbial Biology who served as ASPB President in 1995-96, states that Lemaux’s experience will enable ASPB to develop new outreach directions in agricultural biotechnology—a field that continues to meet strong resistance by the public in the U. S. and throughout the world.

Her outreach efforts have resulted in the development of numerous educational resources, including the award-winning website, ucbiotech.org, which provides scientifically based information and resources to educators, regulators, the press and consumers. Several efforts have been supported by grants from the ASPB Education Foundation. Among the materials featured on the website is "DNA for Dinner,” a middle school biotechnology curriculum. In addition, the site provides games, videos, teaching aids, and educational displays, like “Genetics and Foods” and “Genetic Diversity and Genomics”, some of which are in English and Spanish.

Lemaux also directs research efforts in her laboratory in the Department of Plant and Microbial Biology that focus on the use of genetic transformation systems to study and improve cereals and grasses, like wheat, barley, oats and sorghum. In collaboration with others, these technologies have been used to create value-added cereal crops, like a higher malting quality barley, a hypoallergenic wheat variety, a more digestible sorghum and a wheat variety that resists sprouting while still on the plant – a problem causing millions of dollars of losses in the U.S. each year.

Lemaux previously served as chair of ASPB’s Public Affairs Committee and as a member of the board of directors of the Society’s Education Foundation. She is also a member of the Public and Scientific Affairs Board of the American Society for Microbiology and has served on the National Sustainable Agriculture Advisory Committee and the Biological Sciences Advisory Committee for the National Aeronautics and Space Administration.

She received ASPB’s Dennis R. Hoagland Award in 2003 for outstanding plant research in support of agriculture and was named a Fellow of the Society in 2009 (Hoagland was a former faculty member in the Department of Plant and Microbial Biology and a former President of ASPB). She is also a fellow of the American Association for the Advancement of Science and the Crop Science Society of America. In 2010, Lemaux received the Career Achievement Award from the Society of In Vitro Biology. She earned a BA from Miami University and her MS and PhD degrees in microbiology from the University of Michigan.

Lemaux will assume the presidency on October 1, 2012. Also from UC, elected as ASPB’s secretary, is Julia Bailey-Serres, professor of genetics at UC Riverside. Richard Vierstra of the University of Wisconsin, Madison will also join ASPB’s governing Executive Committee as an elected member. ASPB is a professional scientific society, headquartered in Rockville, Maryland.

Environment by everything interactions: from antibiotic resistance, to indirect infections, and beyond
Remote via Zoom
END_OF_DOCUMENT_TOKEN_TO_BE_REPLACED
@Berkeley Plant & Microbial Biology
3 days ago

Check out Professor @KarineGibbsPhD speaking on her research tomorrow! https://t.co/agfKUBliME