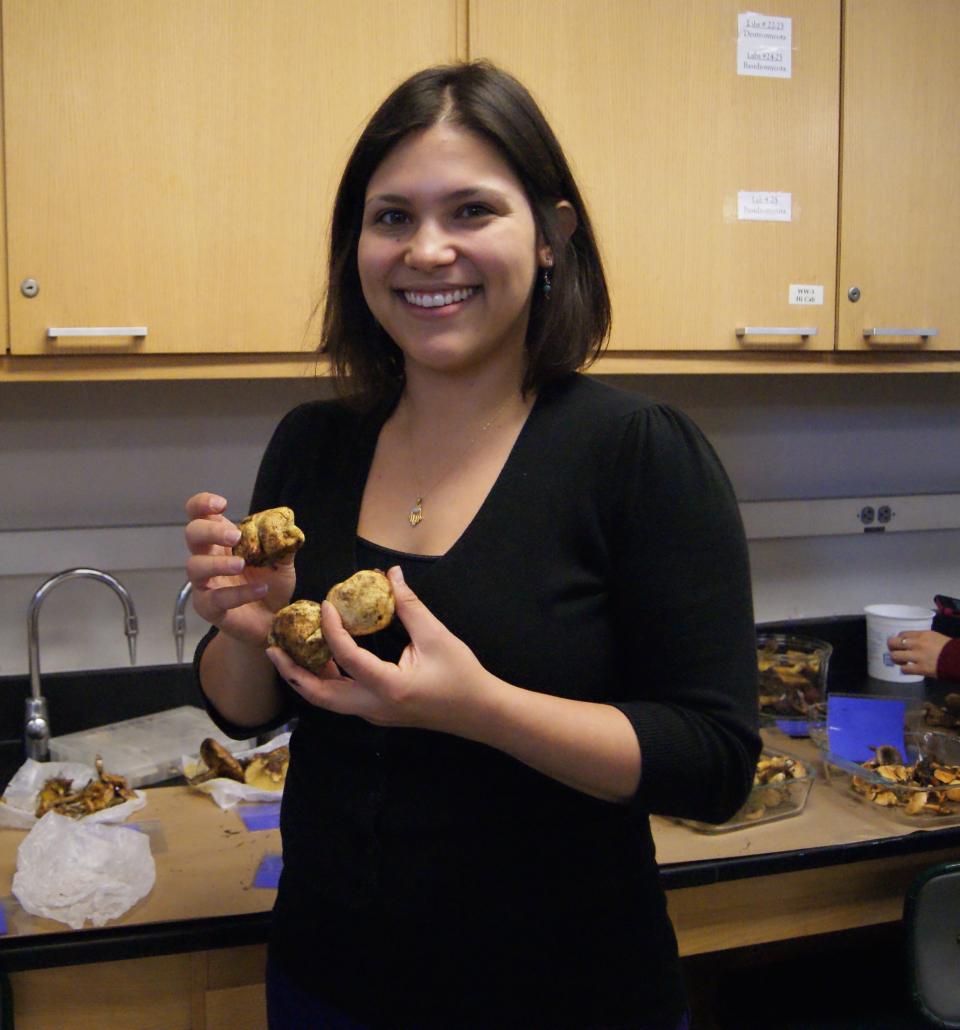 An extensive study by a UC Berkeley graduate student has found that a rich, fungal spore bank under the devastating Rim Fire two years ago remained intact and sparked the rebirth of new plants, trees and seedlings.

Spore bank fungi are adapted to disturbances to serve as partners for regenerating trees; there were even some fire-adapted fungi that increased in abundance following the blaze.

Sydney Glassman closely studied the Rim Fire of 2013, one of the most devastating blazes in California's history. It was the third largest fire in California history, burning 257,314 acres.

Glassman and her colleagues in Tom Bruns' lab in the Department of Plant & Microbial Biology had already been researching and observing long-term plant and fungal diversity in the area, and the symbiotic interplay between mycorrhizal fungi and trees. When the Rim Fire came along and destroyed their long-term study plots, Glassman took that opportunity to check the viability of the fungal spore bank just underneath the fire, and test the potential for rebirth.

She found that the forest floor was rich with nutrients which are now already rebuilding the forest environment. After severe fires, the intact layer of the ectomycorrhizal (ECM) fungal spores survived and served as a partner for regenerating forest trees. Glassman and her co-researchers also discovered that there were specific fire-adapted fungi such as Rhizopogon olivaceotinctus that increased in abundance after the fire. The results of Glassman's paper were just published in the October, 2015 issue of ISME Journal, a multidisciplinary journal of microbial ecology.

"It is important to know how our environment is responding to these catastrophic wildfires that are burning our landscape," Glassman said, especially following California's devastating spate of recent forest fires.

Even though a potentially disastrous El Niño is now on the horizon in California, the plants in the Rim Fire area are established enough that they will be able to thrive, said Bruns, a world-renowned expert on fungi. Erosion, however, could be a significant problem for the more recent fires of last summer if followed by the massive amounts of rainfall meteorologists are predicting. 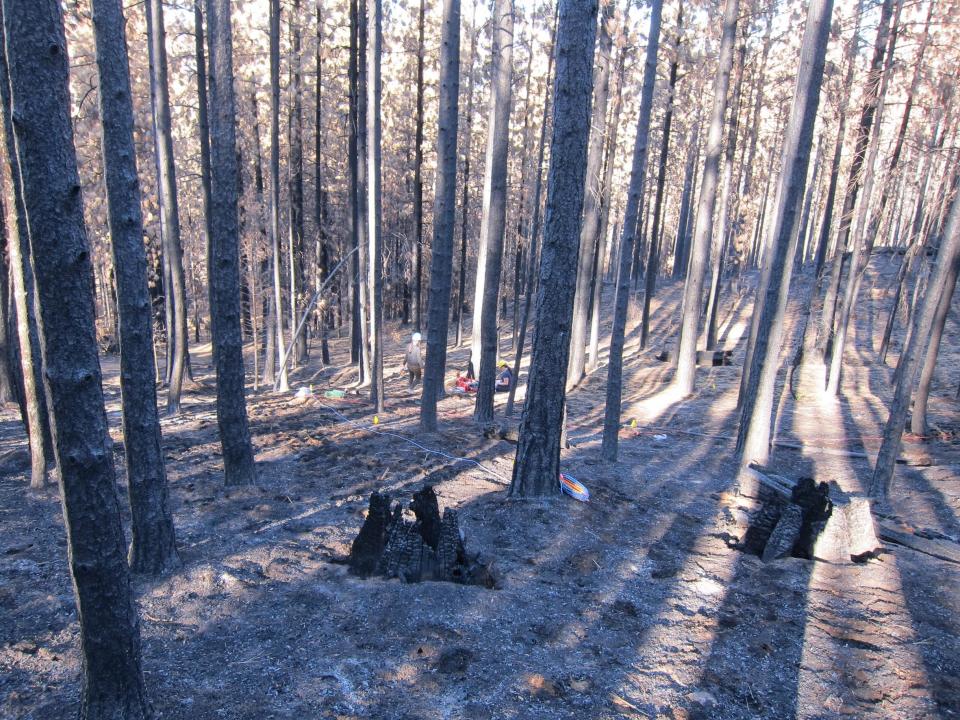 Fungi and trees in forests enjoy a strong symbiotic relationship and are dependent upon each other for many things. It's a fascinating field for Glassman, who will graduate this year with a PhD from the Department of Environmental Science, Policy and Management in the College of Natural Resources.

"The fungi I study, ECM fungi, are necessary mutualists for many tree species and most forests would not exist without them," Glassman said. "Fungi are the least studied group of organisms and there is a lot of room for discovery. Due to recent advances in high throughput sequencing and bioinformatics techniques, we are finally able to answer fundamental questions about their biology and ecology that we have been able to ask with larger organisms such as plant and animals for decades.  It is a very exciting time to be a fungal ecologist!" 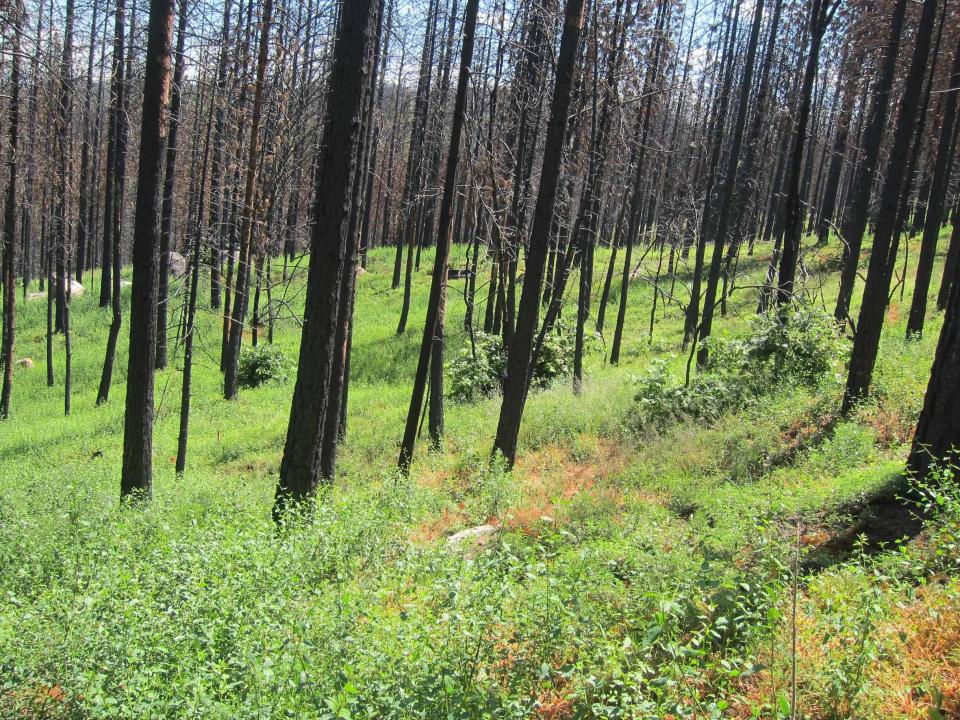 Glassman sampled the ECM spore bank using pine seedling bioassays and high-throughput sequencing before and after the Rim Fire. "We found that ECM spore bank fungi survived the fire and dominated the colonization of in situ and bioassay seedlings," said Glassman. The ECM spore bank are fungi that are specially adapted to persisting and surviving disturbances, like the Rim Fire.

"It is important that they stay intact so there are fungal partners for regenerating trees after wildfires or other catastrophic disturbances destroy the forest," Glassman said.

"We had been studying these plots for two years and had in-depth information from advanced high throughput sequencing techniques on the fungal communities in these plots prior to the fire," Glassman said. "It is incredibly rare and incredibly lucky to have pre-fire data on any given location, and even more rare to have microbial data."

"Fungi are fascinating," Glassman said. "They are important in nearly every aspect of our everyday lives yet we know almost nothing about them. They are responsible for making beer, cheese, bread, and many foods that people enjoy on a regular basis. They are primary decomposers, pathogens, and symbionts."

Sydney Glassman is also an amazing chef. Check out her blog here: fungifoodie.com