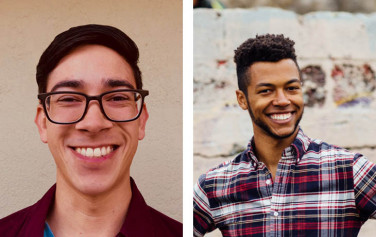 In May the Plant Genome Engineering Symposium (PGES) was hosted on the UC Berkeley campus. The annual conference is hosted by graduate students in the Department of Plant and Microbiology to showcase and share research by experts in plant genome engineering and related fields, as well as to provide a venue for students to present their research to their peers

One of these talks— delivered by Gordon Pherribo, a PMB PhD candidate, and Santiago J. Molina, a Department of Sociology PhD candidate—illuminated the history of biotechnology  and reflected on the ethical decisions that scientists face. Their presentation, titled “Backstage Decisions and Front-Stage Experts: The Politics of Genome Editing,” focused on how scientists make ethical decisions in the usage and regulation of emerging and controversial biological technologies like recombinant DNA and CRISPR.

Highlighting the work of Pherribo and Molina signals a seachange in interdisciplinary thinking and research among graduate students and early-career scientists. By inviting a sociologist and microbial biologist—two scientists with very different academic backgrounds—to jointly deliver a talk, the PMB graduate students organizing the conference are helping to prioritize the promotion of intersectional voices calling for changes in how researchers discuss new technologies.

When Pherribo and Molina met last year they discovered that they shared an interest in science and its role in society. They began discussing their ideas in casual reading groups, where they chatted about  papers on the history of biotechnology and science education. These conversations  eventually became a project that was funded by the Center for Technology, Society, and Policy. Their research question centered around the field of rapidly emerging biological technologies: How and to what effect do scientists aim to self-regulate in the face of emerging biotechnology?

“To do this, we compared processes of decision-making around an old technological revolution—recombinant DNA in the 1970s, and a new one—CRISPR-Cas9. By juxtaposing these two cases together we hoped to learn about how the history of biotechnology is shaping decision-making in science today,” says Molina

Invented in 1974, recombinant DNA is a technology that enables the joining of DNA from different species and the subsequent insertion of the hybrid DNA into a host cell. CRISPR-Cas 9 is a very new technology that enables researchers to edit parts of the genome by removing, adding or altering sections of the DNA sequence. CRISPRs are specialized stretches of DNA, and the protein Cas9 is an enzyme that acts like a pair of molecular scissors, capable of cutting strands of DNA.

To understand how the scientific community views new technologies in the 1970s and now, Pherribo and Molina compared two important conferences that showcased the newest technologies of their day: a 1975 conference at the Asilomar Hotel, which focused on recombinant DNA, and a 2015 conference in Napa Valley that highlighted CRISPR. They interviewed attendees of the 2015 conference to try to identify the decision making mechanisms around these cutting-edge scientific tools.

The Asilomar Conference on recombinant DNA was an influential conference organized to discuss the potential biohazards and regulation of biotechnology, where a group of scientists participated in the conference to draw up voluntary guidelines to ensure the safety of recombinant DNA technology.

The Napa Valley Meeting in 2015, similarly, was a meeting of scientists to discuss CRISPR-Cas, with the goal of identifying where self-regulated action was needed to ensure safe and ethical applications of genetic engineering of the human germline.

Pherribo and Molina performed a comprehensive sociological review of the two events in addition to the live interviews they conducted, combing through historical narratives of each conference , such as each conference’s agenda, correspondences, and the large body of oral histories available in the UC Berkeley Libraries.

“How the history of science is portrayed matters to how we make choices today and in the future,” Molina says, concluding that past efforts at arriving at a consensus with expert decision-makers around new technologies were not adequate, and that our current science climate with increased financial and commercial interests make it even more increasingly difficult to make ethical scientific choices.

“This project is very exciting to me because I am able to critically engage how different elements of my graduate school experience shape me as a scientist and person. The conversations that have come out of this work have been very helpful for me in learning more about the culture of science and the ways this culture influences how people in science make decisions around genetic technologies, and also how future scientists are trained." says Pherribo, who is integrating sociology research into his dissertation.

Both Molina and Pherribo agree that there’s much work to be done on being more intersectional in these two fields. “The intended outcome of this project is that we would develop educational modules about how scientists relate to society and how scientists make decisions about themselves,” says Molina. “If they could hear these stories about scientists from the 1970s that were wrestling with some of these decisions, and to also humanize the scientists that are alive now we could really make an impact on how students shape their own political choices.”

The path to creating educational tools requires significant infrastructure, but both graduate students are taking steps in collaborating with external organizations. “We’re working with Free Radicals, which is a science blog that centers around these issues, like decolonizing science and making science more accessible,” says Pherribo. “Free Radicals is a group that is interested in political education and promoting equity in science. I’m part of a science education working group, collaborating on a toolkit that different educators can use which touch on the issues of race, gender, and ethnicity.”

Watch a video of Pherribo and Molina’s presentation via the Plant Genome Engineering Symposium Livestream.